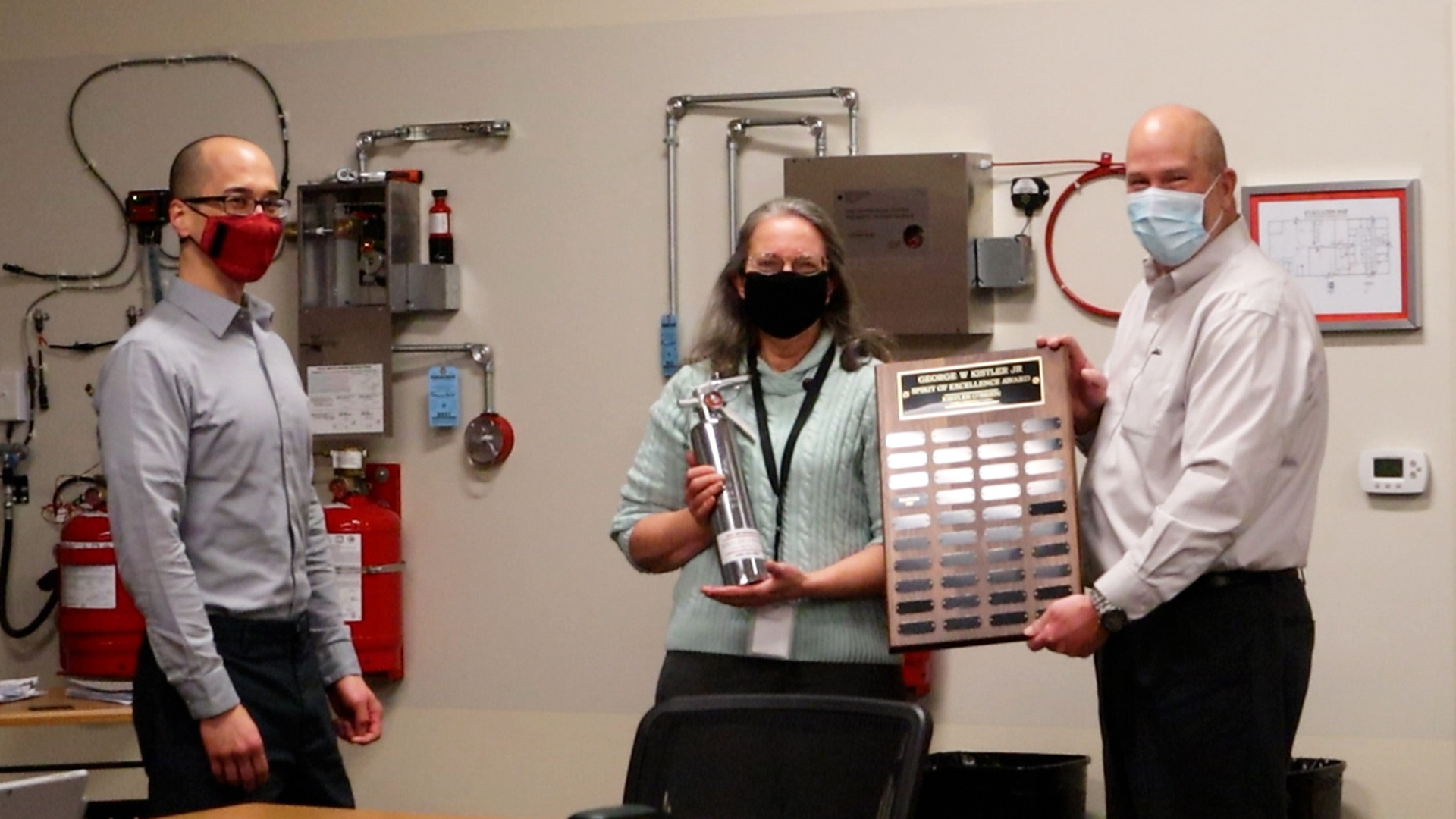 A single award honoring an employee can represent various things to various people, but when it comes to Kistler O’Brien Fire Protection, there is one award that shines the brightest. The George W. Kistler Jr. Spirit of Excellence Award is the ultimate honor a KOB employee can achieve, signifying the highest level of respect from Leadership.

The George W. Kistler Jr. Spirit of Excellence Award honors the late George W. Kistler Jr., a well-respected businessman of the Lehigh Valley and a much-loved KOB leader who is still missed among the staff. Not only does this award touch the hearts of many at Kistler O’Brien, it is presented to individuals who have demonstrated quality workmanship, exemplary performance, and professional excellence.

It is with great pride to announce that this year’s George W. Kistler Jr. Spirit of Excellence Award honoree is Sherry Durick, a 30-year Kistler O’Brien veteran and an employee who exceeds the above qualifications. Defined as a true utility player, Sherry has helped support the growth and success of the Company by working in various roles in different departments and accepting several challenges throughout her tenure. Since Sherry’s start on July 25, 1990, her titles have changed over time, from Technician to Sales Representative to Inside Sales and currently Data Analyst, setting high expectations in Operations, Sales and IT.

After working as a Service Sales Representative, Sherry switched roles to be Inside Sales. According to KOB Sales Manager, Scott Guzzo, Sherry achieved great success as a service salesperson, and to this day, Kistler O’Brien still uses some of her accomplishments as benchmarks. He added that Sherry was a great performer and always supported the sales team and kept them in line with consistency.

Sherry is currently a Data Analyst for KOB’s IT Team. According to her current supervisor, Ben Bretzik, Technology Systems Manager:

“Sherry is more than just the titles she’s held at KOB. She is intelligent, creative, tenacious, dedicated and collaborative among other exemplary attributes. Sherry is a constant reminder of dedication and what can be accomplished when you put your mind to it.  In the time she has been part of my team she has developed processes and procedures to improve the transition to a new software platform, performed application training for our employees, helped improve data collection and storage, redefined legacy inspection data for accuracy and simplicity, developed procedures to simplify service sales estimation and learn SQL, essentially a new language.”

“Sherry continues to grow as a professional and I believe as a person expressing her own dynamic characteristics setting an example for all of us. To use a phrase from Louis Pasteur; ‘Chance favors the prepared mind.’ If it was chance that Sherry’s journey led her here to KOB, she was definitely prepared for the adventure and I am thankful she is a part of my team and KOB.”

From all of us at Kistler O’Brien, a heartfelt congratulations to Sherry on her achievements and for being honored with the George W. Kistler Jr. Spirit of Excellence Award 2020! We wish her continued success and look forward to what the future may hold for her.

How to Prevent Fire Sprinkler System Pipes From Freezing

A COMPLETE SOLUTION FOR YOUR FIRE PROTECTION NEEDS